The 2nd Congressional District -- spanning Franklin, Hampden, Hampshire, Norfolk, and Worcester Counties -- is the second largest congressional district in Massachusetts. It is framed by Connecticut and District 1 to the South and West, and districts 3, 4, and 5 to the East. District 2 was redrawn in 2012 according to the 2010 census. 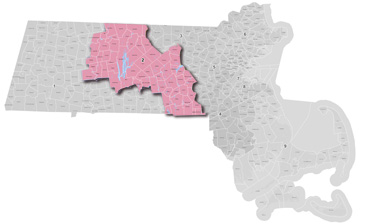 The diverse 2nd District includes everything from picturesque college towns to rural hamlets and fairly large industrial communities. Rich in history, the area was the frontier for the first colonists. Farming initially dominated the region's economy, but in the last century agriculture has given way to mill towns and larger industries.

As a tourist destination, the 2nd District provides many attractions from the college towns of Northampton and Amherst, the Quabbin Reservoir, to the city of Worcester.

Along the western edge of the district, the Pioneer Valley, is western Massachusetts' primary corridor for living, working, traveling and enjoying the sites of rural New England. Among the numerous quaint cities and historic mill towns lies the sprawling Connecticut River, which was recently honored as an American Heritage River. Some of the many highlights savored by its residents include Shelburne Falls, Montague, historic Deerfield, and Holyoke.

The scenic Mohawk and Johnny Appleseed Trails follow State Route 2 through the northern part of the District and supply visitors with tourist attractions and picturesque countryside vistas. The eastern portion of the 2nd District is largely dominated by the industrial cities of Leominster (Fitchburg and Gardner — 1st District), which have been renowned as plastics and furniture industry capitals of the U.S.

While the 2nd Congressional District of Massachusetts is notable for its rich history and scenery, the large presence of colleges and universities ensures that the region will continue to be one of the most unique in the country.